Magdalena Matanova is a founding partner of MMXX Architects, an architectural studio based in Sofia, Bulgaria. Together with her colleague, architect Hristo Hadgiganchev, she formed the independent practice in 2006. Their work encompasses architecture, interior design and furniture design. Projects include: residential buildings and apartment renovations, residential, commercial and office interiors, administrative buildings, and hotels.
MMXX Architects’ design philosophy is lighthearted. As a rule they experiment, and with every completed project their work evolves. They always rely on intuition. Sometimes their ideas are impulsive, and other times they follow classical principles, but they jokes at least once. And since they believes that “the sense of beauty is inborn,” they simply look for different roads to it.

In 2008 MMXX Architects were invited to present their work as part of the Bulgarian Pavilion at the 11th International Architecture Exhibition La Biennale di Venezia. Magdalena and MMXX Architects have been recognized in numerous publications and awards, including a Golden Vizar 2007 for their project in Kamen Briag and WhATA Building of the Year 2015 award for the Varna Office Building. Most recently, the Varna Office Building, was nominated for the EU Prize for Contemporary Architecture, Mies van der Rohe Award 2017.

– Magdalena graduated from the University of Architecture, Civil Engineering and Geodesy (UASG), Sofia with a Master’s degree in architecture in 2003 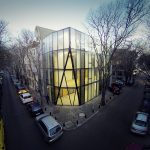